I had some pig and some lentils lying around, so I made some soup. Zo znooty!

I had some flour, water, yeast, and salt lying around, too.

I made these potatoes. They were good.

The most distinctively French Chinese delicacy is a kind of egg roll called a “nem.” It’s a small, crispy, bubbly, greasy roll filled with meat and who knows what that you wrap in mint leaves and green leaf lettuce, then dip into a thin sweet sauce and shove into your mouth. It’s messy and fun and has a nice mix of flavors and textures. That, says my older daughter, is why they call them noms. 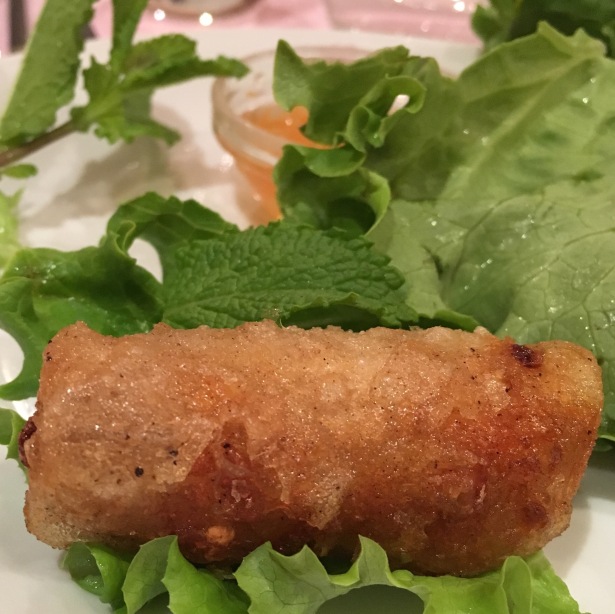 There is a hamburger bun under that egg, and a pretty tasty burger with cheese and unidentifiable sauce and accent meat. Of course, the French choose to Frenchify the hamburger, a food item that combines German, British, and American cuisine. It’s why they put cheese on the top of their ham sandwiches and serve their hot dogs on baguettes.

No, I did not eat the sad tomato.

Pasta sauce is my favorite thing to cook. I make it often, usually from canned tomatoes. When we saw the tomatoes at the street market, Andi suggested I try to make a sauce with them. Challenge accepted! 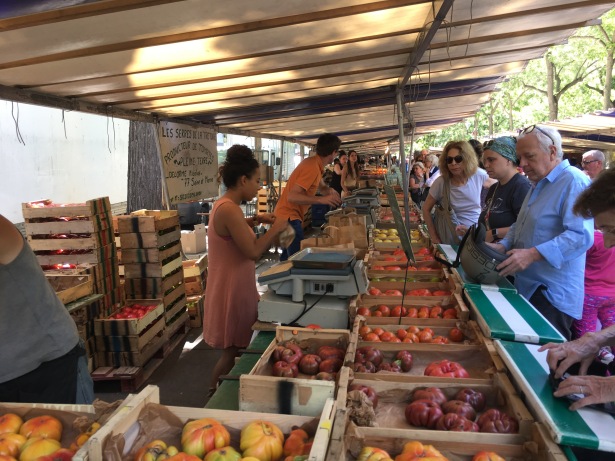 The tomato stand was large and busy, and they had tomatoes of every description. I wanted some of the big, oddly shaped heirloom tomatoes you can see in this picture, because I know they tend to be flavorful. (I hate bland tomatoes, and so should you.) when we got to the front of the line, Andi explained to the tomato lady that I was going to make a sauce. “Are you making it this weekend?” She asked. Andi said yes. The tomato lady picked out a variety of tomatoes from the bins here, including some of the heirlooms I had my eye on. There were also some yellow ines and some smaller red and purple varieties. They were all very ripe. We also bought a separate bag of tomatoes to eat fresh, with a different mix of tomatoes. These people know what they are doing. The tomatoes were all excellent.

At the same market, I bought some incredible aromatics: a huge head of garlic and some banana shallots. I had never seen or heard of banana shallots, but just look at them: 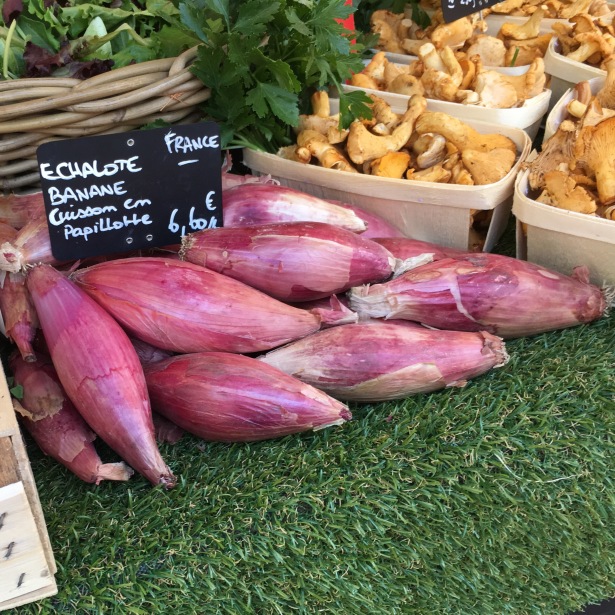 Hey! I saw you eyeing those mushrooms! Stay focused!

Finally I needed some meat. The street market had a number of meat sellers, but I ended up doing my meat shopping at Monoprix. I don’t have any food processor here other than knives and a cutting board, so I kept it pretty simple. I started with some leftover chipolata, a mild pork sausage. I added some boeuf haché. Sure that means ground beef, but it sounds so classy, and the boeuf was bio (Fronch for “organic”) and had been munching on the finest greens. The final meat ingredient was veal. I don’t cook with veal much, because there aren’t a lot of dishes where veal is really the best meat for the job. I chose veal here because the French seem to still eat a lot of it, and because chefs praise it for its connective tissue. I like a lot of body in a tomato sauce, and I wasn’t using paste or reducing the sauce all day, so I thought the veal might help. (This veal was also bio and pink, meaning it was raised and murdered in the most humane way possible, probably.) Here is the veal browning in the pan. You can see some stringy bits of connective tissue. This all rendered out; there was no tough tissue in the finished dish.

Next I browned the banana shallots and garlic in the meat fat and some olive oil.

Finally I got the meats stewing with the alliums so I could get to work on the tomatoes. Why yes, that is a rind of Parmigiano-Reggiano in there.  Good observation. 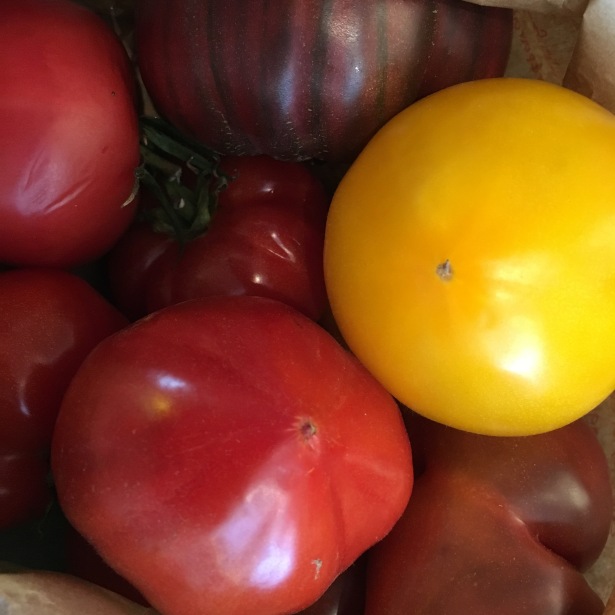 I had to get the skins off of these tomatoes, so I scored and blanched them. This was a bit of a messy process, but most of that mess ended up in the tomato bowl. I cut up the tomatoes with a paring knife, relying on heat and time to break the tomatoes down further. Here are the tomatoes stewing in a pan with some basil, herbed de Provence, and more garlic. I later added some red wine.

I let these guys and the meats stew separately for a while, then combined them. The total cooking time was about 3 hours. Voilà! 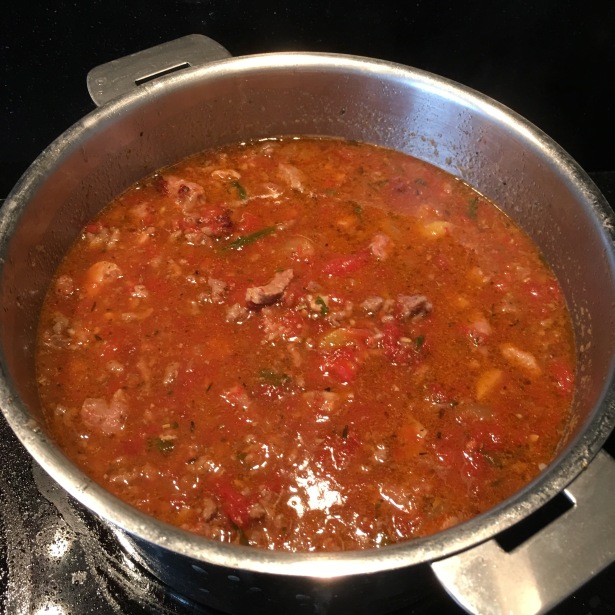 I can eat sauce straight out of the pot, but we were having guests, and Andi has this thing where she likes to eat boiled strings made of wheat and eggs. I bought these at a pasta shop on the Rue Daguerre:

I boiled the fettuccine for 4 to 6 minutes and combined it with the sauce. It looked like this.

You can see it’s not a thick sauce, nor was it meant to be. It did coat (veal!) and flavor the pasta nicely, although it’s kind of hard to see here. You can see bits of sausage and veal, which did not melt (this was not an all day sauce) but were nice and tender.

I was very happy with the finished dish, and two picky eaters liked it, too. I won’t give up my thick sauces made with canned tomatoes and paste, but this was a delicious dish that let fresh tomato and tender meat flavors shine.

If you have seen a certain Pixar movie you know that ratatouille is the znootiest of all French vegetable stews.  At the end of the movie a znooty food critic has a trippy flashback upon eating a particulary znooty layered ratatouille.  Andi makes hers the old fashioned way, in a dutch oven…

…but first she grills the vegetables!  Oh, Anton Ego, you have no idea what you are missing: 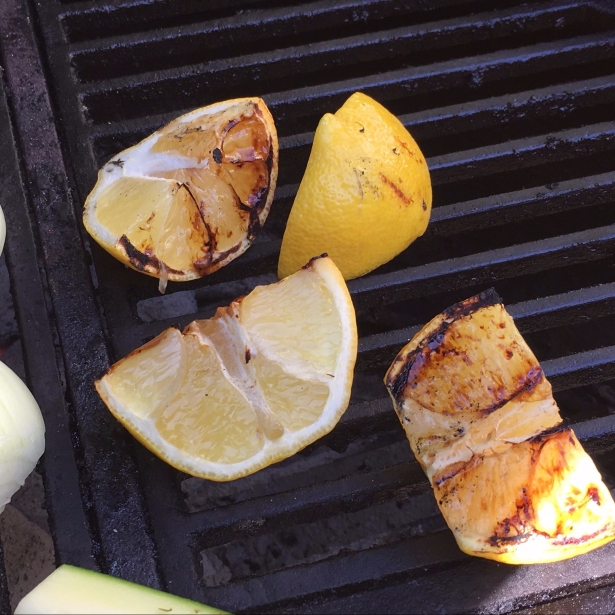